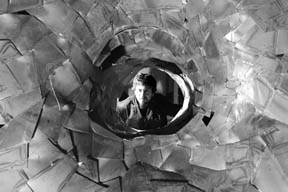 Resident of the tallerBDN from December 2010 to April 2011

He has a diploma in Iron Sculpture from Universidad Católica de Chile (1998); a Degree in Fine Art from Universidad Finisterrae de Chile (2002). He studied the advanced training programme in applied arts in Sculpture at the Art and Design Centre, Escola Massana, in Barcelona. (2005). He has worked with artists like Ivan Diver and Catalán Gabriel, among others. He has taken part in the Collective Sculpture Exhibition held at the Universidad Católica de Chile (1998). He has organised individual exhibitions at the Esoteric Sciences Pavilion of Chile (1998) and at the Social Club called Stadio Italiano de Chile (2003). He has also participated in the Collective Forging exhibition at the Community Centre of the Raval Commercial Area (2009), in the Collective Exhibition “Forja Viva” (Forging Live) at the Maritime Museum of Catalonia (2010) and in the Collective Monographic Blacksmith’s Exhibition in Besalú (2010). His solo exhibition “Reintegració al Caos” (Return to Chaos) was held at La Gabella Ethnological Museum in the town of Arbúcies (2009).

Obelo project
“I’ll work on the concept of verticality which is understood as being a gesture inherited from sculpture, the body adopts this walking position, or that of standing up, it’s a sign of vitality, of life, of events that happened, of the continuity of a ideal distinguished somewhere, pointing out the sky’s direction, reminding and connecting us with the divine metaphor.

I believe that humans build an image of themselves through verticality or try to explain the reason for their existence, whether it is due to the desire for greatness or due to the simple act of marking the way with a landmark, a milestone.

Obelo Obelo is a large-scale sculpture (measuring approximately 2.40×1.80 m) that breaks the great silence and allows me to express myself, as I know how to use my energy, my constructive language.

Therefore the piece itself is in fact a landmark, marking my way, a beacon, my shield, an act of self-conviction, an act of absolute faith and the conscious image of the consecration of the sculptural piece, of the liturgy of many hours of work.” (Franco Filipponi) 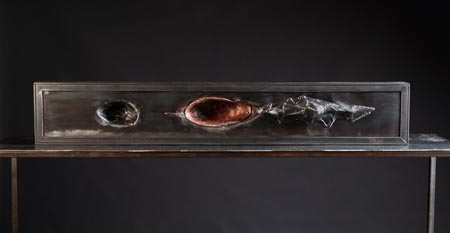 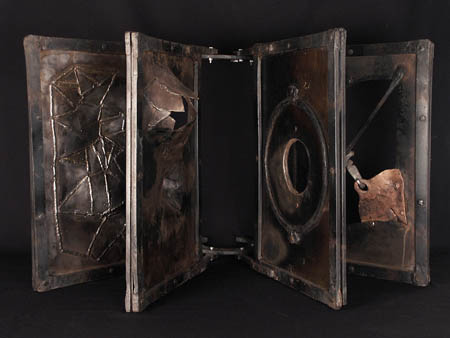